Just another day, until this… 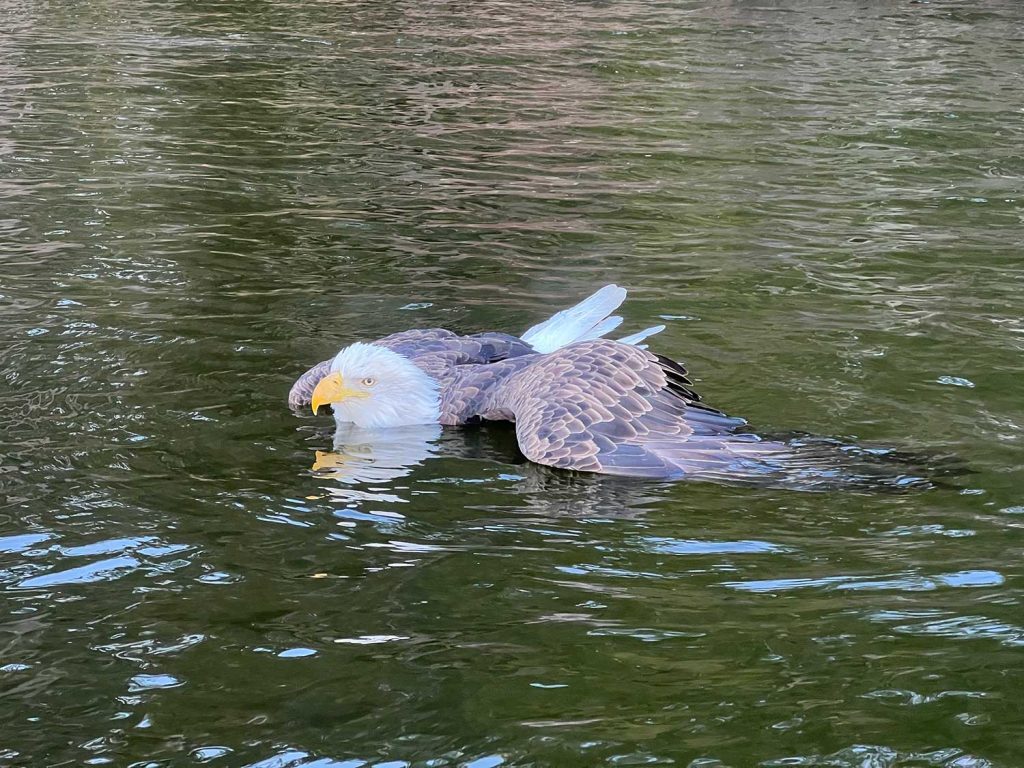 Just another day, until this…

November up north rarely sees 70 degrees with no wind.  It was a chance to get out one more time to my favorite little secret fishing lake, take out the solo canoe and see if I could bring home one fish for dinner.  Turns out it the lake gave me that last fish of the season and more fun with the rest I let go.  A northern for dinner fresh out of a cold lake in November, you can’t beat it.  Trolling around taking in the sights, a brief landing and a look around in a magical cedar stand and some warm sun on my back was enough to write a column about without the drama of what happened on way back to the portage.

I always see bald eagles on every trip to this lake.  I’ve seen wolves in winter there, deer on the shore and otters swimming in the shallows.   Fishing this lake is usually about bass, one after another, that we always release. Most days we land a pike and in spring a few crappies for the fry pan.    It takes some work to get to the lake and there are rarely any other people on the lake or on the shore.  It’s a gem of a find in the middle state land and forests of big white pine and cedar.  I could take you there, but you have to blind folded the last 10 miles, it’s that kind of special place.

As I drifted away from the bass rocks and headed toward home, a lone adult bald eagle soared east from near my landing.  In the red pines on the point, another eagle was oddly standing on ground as I neared shore.  The adult with its white head up close is massive.  This one was wet and sitting in the woods.  It sat oddly unperturbed as I paddled within 30 feet, strange to say the least.  I took a few I phone pics and paddled on to the landing to pack up and portage out.  Fileting my fish, I noticed a flash off the point as that eagle flew a few feet out and landed smack in the water just off shore.

Now that is really odd, must be something wrong.  I got back in my canoe and paddled over.  It was floating like a duck and flapping its wings weakly.  I felt helpless knowing an eagle with a powerful beak and massive talons can inflict sever injury.  I pushed the bird towards shore with the bow of the canoe.

It stood on a submerged rock soaking wet and shivering, head drooping and looking sick, very sick.  This poor bird, the symbol of our Republic, a fierce predator and scavenger was dying of what likely was lead poisoning.   The symptoms were there.  Its a slow death over a few days of agony all from ingesting just a few pellets of lead shot or a lead jig head found in fish guts on shore.   All I could do was leave it to die and try to come back the next day to retrieve the body.  I paddled back and portaged home and felt a deep sadness and helplessness that still makes me wonder if I could have done more.

The next day the bird was gone.  No sign of a struggle or a kill or even a feather.  What happened I won’t know but the bird with it’s head bowed, and shivering is a lasting memory I won’t forget.

Thank you for sharing your experience. It is truly heartbreaking to watch the end of life of any creature as they struggle to survive, no matter the circumstance of their demise. It always reminds me of my own mortality, and to appreciate more the life all around me that is given in the present day, including my own life, but yet knowing that all this life is headed to the grave, sooner or later, and new life may well come after it to replace it.

Was it lead poisoning? Perhaps! I’ll leave that to those who spend more time studying such things. If it was, it is a sad reminder of how much we impact the world by much of what we do as a society as well as individually, impact we seldom observe the results. I’m glad you were able to observe and share your experience of the apparent demise of a majestic bird, Bald Eagle. it makes us more cognizant of the fragility of life, and that we ought to consider the impact of everything we do and say. However, even though I, too, have seen the demise of some not so magnificent, and maybe this one died and possibly floated away to somewhere else and, maybe, was taken by another carnivore in the area, who may also then suffer from the same poisoning, I’ve also experienced some that recovered a bit from a, seemingly, certain death and, since you didn’t see a sign of what happened, I’d like to believe it did recover and flew away to a happier hunting ground! Can that possibility be ruled out?