Last Leaves are on the Ground 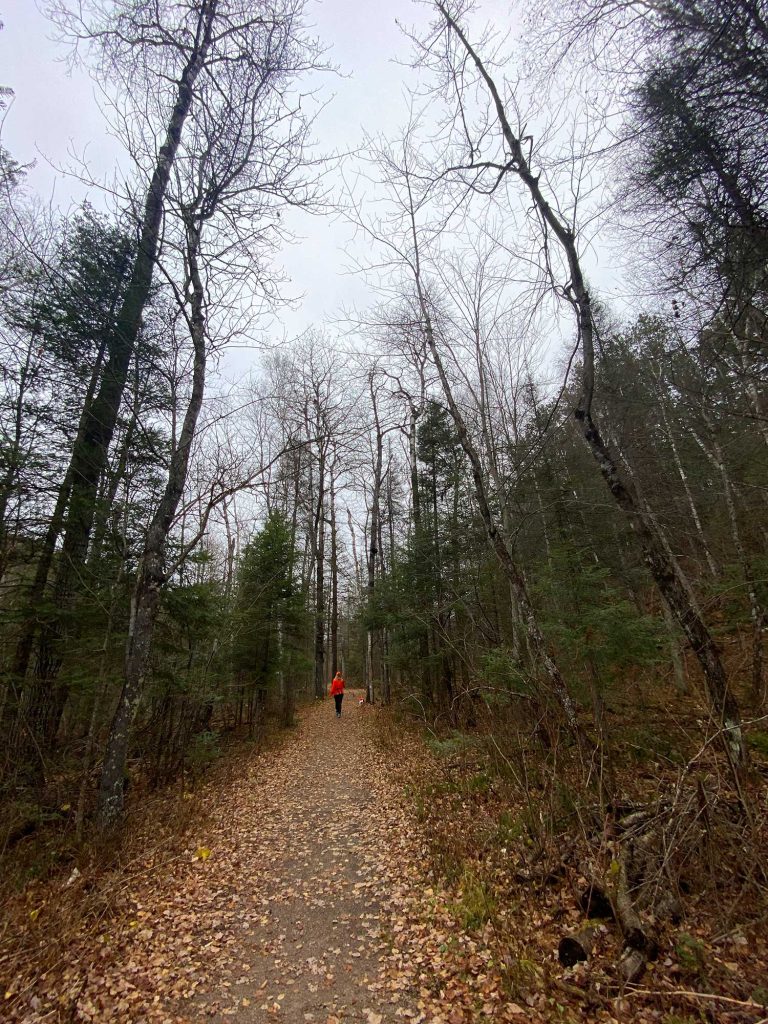 Last Leaves are on the Ground

Hiked out yesterday after a hard enough frost to curl the leaves on the hearty raspberry bushes and turn their edges black. The colors are down, except for the Tamarack holding watch on the edge of the Boundary Waters. I spotted a lone Bald Eagle in a dead tree keeping sentinel as well. His interest was also in the missing leaves because it means much less cover for what he’s really keen on picking up with his sharp eyes, small mammals.

There was lots to see and much less to hear in the woods. One Hairy Woodpecker and as you can imagine, this time of year, too many to count of the Red Squirrel variety. They were noisy. Barking at us around every bend. Scurrying up and around the red pines and birch. It amazes me how they can be so loud with their mouths full. No manners!

The starkness of the earth tones on a gray morning is complemented by the frozen temper of the crisp air. It sears your lungs a bit, bites at the toes and insists on numbing your fingertips. The wind requires that you wear layers with zippers because you’ll overheat after minutes if you don’t have a way to vent. If you sit down, like I did, with Mr. David Byrne, you begin to wish at once you had another layer. It pays to keep moving.

And yet, does it. As Jen and David outpaced me and my camera on the trail, I stopped by the water and took some time with my own reflections :). Even here in Ely, it is difficult to slow everything down and just relax, reflect, just enjoy what is right in front of you, because there’s always more to do. The next project and the three you are trying to complete. There’s the time by which you need to return and the things and people that are calling, pulling at you. But… even here in Ely, it pays to make the most and the best and sometimes even the least of the moment. If that means zipping up your layers and enjoying some time on the log by the lake to think then do it.

It’s hard, though, not to frame a catalog cover or think about the way the words might fold together in a blog about this moment, however brief. I try to focus on some details that don’t seem at first to be obvious, like a beaver run cut through the tall grass that is both green still and yet brown and dry. A beaver run that they’ve kept open from the marsh that is partially hidden by a slight tree line on the left of the trail, all the way to this shore of the lake. This edge by the marsh is always more treacherous in the winter due in part to beaver activity. It also has current moving and in the shallows like at similar points of contact on other lakes it will never fully freeze here, even though in a couple of months, just yards away there will be two to three feet of thick hard ice.

Across the lake I can see in the low light the splash of white that is a small waterfall. I cannot hear it, only the wind blowing through the barren trees and the dry grass. That and the irritation of the squirrels. The evergreens are the forest now. They are the color of the season from near black in hours like this to vibrant Kelly green under a sunlit sky. The rest of the forest has splotchy holes in it except for an occasional stubborn birch with yellows that have now matured to match the rusted golden tones of the once brassy Tamarack.

There’s no pomp and no splash of fuchsia or orange. There are just soft boughs of green that hang heavy like coat sleeves in the dark aisles of the woods. Boughs that will soon be laden and weighted down with snow like a second skin. Red and White Pines, Spruce and the occasional scrappy Jack Pine on its attempt to compete with the Cedars for which can root closer to the water on the meager offerings of topsoil that are often only a token offering of dusting in the cracks of granite older than all of us combined.

Sometimes, this is where the quiet and the solitude can take you. When it washes over you, finally and you are at peace, the little things become clearer, the seemingly mundane becomes important. You have the time to notice that all of these leaves on the ground, once bright, once deliberate with their assurance are now part of the nutrients required for the earth to rebuild its tenuous topsoil, to sleep a little over the winter. To rest and bloom again. As we trod on them we grind this slow death of Summer into the soil beneath us a little more with each step. We don’t notice, but we dance with nature and deliver something even more beautiful than we took the time to travel to see, to capture in the moment and to talk about all Autumn. We deliver the promise of rebirth and new life when Spring arrives again.

Thank you for these little trips into the North Woods. I now live in LA. We are not far from a couple parks – but they are not the North Woods. My husband and I go back to visit – usually in summer – but meanwhile my spirit reaches out from time to time to the birch and the quaking aspen and the tamarack and the pine… (;-)

Thank you. Glad to gift you some of the wilderness while you are enjoying the West coast. We will try to keep it up. 🙂