A Fall Canoe Day-Paddle in Color 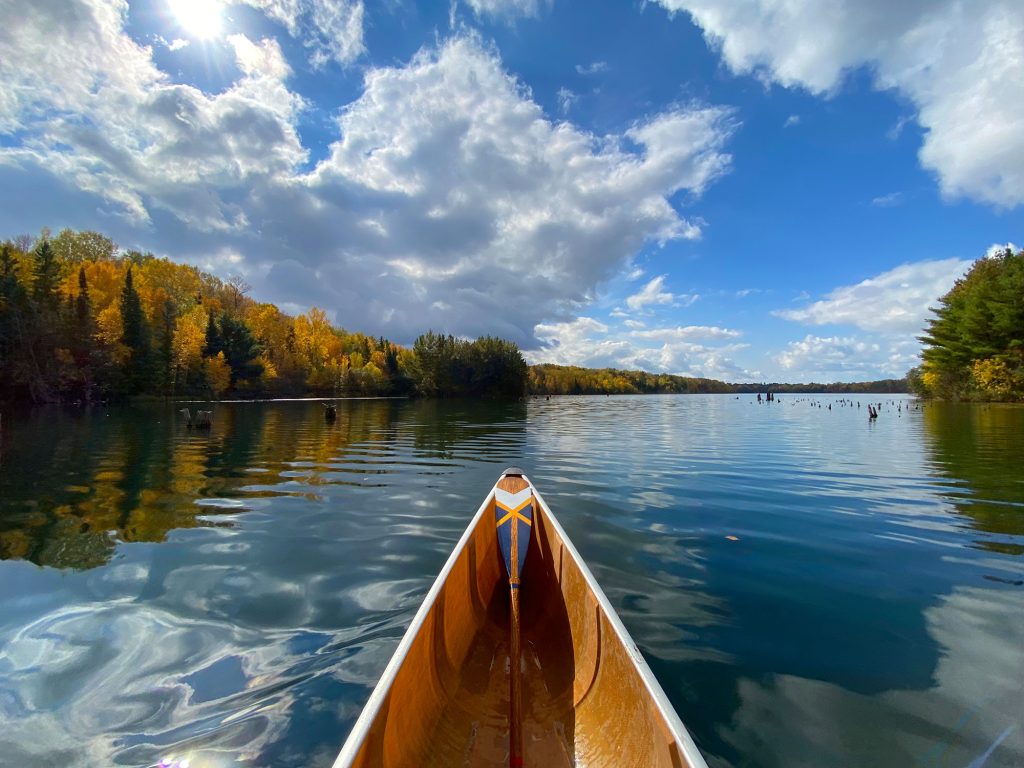 A Fall Canoe Day-Paddle in Color

The ghost trees reach up to the surface of Miner’s Lake (a not so hidden gem, right in town, Ely, Minnesota) with their algae covered arms. When the sun hides behind the clouds overhead their branches are invisible until the white clouds shift in the cornflower blue sky. My canoe slides silently over the tallest of the dead forest drowned in the old mine pit. Here and there on the lake, there are whitened, dry stumps rising up. I say “stumps” but they are really the broken off tops of even taller trees than those below the surface. On some of these that resemble old pylons, six black cormorants sit like sentinels, watching for rainbow trout rising to the surface.

The cormorants are transients, I don’t often see them here in Ely, Minnesota, on the edge of the Boundary Waters Canoe Area Wilderness, but they have voracious appetites. They aren’t deterred by my presence on the water, though if I get too close, they shift from foot to foot, their pale, pinkish flesh colored beaks opening and closing. Overhead, a pair of Canadian geese are noisily honking, but these all black predators, more reminiscent of Turkey vultures than our black, common ravens, keep their voices and thoughts close to the vest.

Along the shoreline the evidence of September temperatures bottoming out in the mid-twenties and the waning of the recent Summer are on full display. Fuschia, red, orange, yellow, amber, green, white, and brown, along with every shade in between dot the horizon like a painter’s palette. In the bow of my canoe rests a vintage Smoker’s Brand Quality Paddle. During the first Covid Summer, my son, Simon and I began refinishing and painting patterns on old paddles. Some of you may recognize the stylistic homage to Sanborn Canoe Companies Painted Artisan Paddles. Mine are heavier of course, throwbacks, when paddlers cared less about weight, probably because they didn’t have to carry every piece of gear wherever the portages led.

In the varying light, the paddle’s primary color shifts from a midnight blue, almost black to a more vibrant blue that reflects the robin’s egg shade of the sky. On the return trip up the lake, the current has visibly subsided and most of my paddle strokes slice through a liquid mirror version of the stunning box of 64 Crayola treeline. The way the ghosts of trees rise up, nearly grabbing my canoe as it slices through the surface, leaving ripples of wake behind that silently seal up my passage as if I had never passed, is uncanny. It is eerily peaceful. Occasionally, an algae encrusted limb will scrap the bottom of my Wenonah Encounter as I slide over top of the forgotten forest.

I feel as though I could pull and pull forever, through afternoon after afternoon, until the ice begins to form. Without any wind in my face, it is effortless and I feel a little like I’m on the Willy Wonka skiff with all of the scenery on shore streaming by in a barrage of speed and unconscious focus that allows me to take it all in at the same time.

Behind me the cormorants have been roused by something, hunger I suppose, and their twelve powerful black wings pound and splash the lake as they overtake my sleek yellow canoe and rise up into the sun that glints like diamonds off the glass-like lake. A hundred details hammer into my mind’s eye as the echoes of those wings permeate the afternoon peace.

This could be any lake or river in the north, in the wilderness or on its edge. The likelihood of seeing anyone else is pretty slim and even less slim is the chance of having your private thoughts interrupted by anything other than nature and wildlife. It’s a good season to relax during, as long as you are prepared for the weather and the elements. The wind is frequently higher and more unpredictable, the temperatures easily fall into the thirties during the day and night and as a result the water temperature is much colder than it is in the full canoe season. Combine that with the wind and hypothermia is a very real possibility if you get wet for an extended period of time or lose your balance and flip your watercraft. For these reasons and more if you find yourself on the water enjoying a late season trip or even just a day trip you need to take added safety precautions in the Autumn of the year.

To this effect (and also to prep your gear and canoes for next season) there are some Fall Canoe Gear Essentials that you should have easy access to. It is also a good idea to pack a waterproof bag with an extra set of warm and dry clothing, a warm fleece jacket and blanket and fire starter tinder and dry small fuel (sticks, birch bark, medium kindling) etc. A dependable lighter or two and backup waterproof matches and more birch bark goes without saying. These things should be in smaller waterproof bags of their own separate from your clothes and ideally, you should have multiples of them in case you lose a pack or can’t recover it. It goes without saying. But we’ll say it. Wear your PFD, it can save your life and it helps keep your core warm.

Prepare for the worst and have the best time! That’s a good rule of thumb for any season, but on these shoulder seasons, you’ll be in a much better mood with extra gear and peace of mind than if you’re cold, miserable and in danger. Pack a rain jacket, good appropriate footwear and throw on one of our Piragis super-lightweight breathable Windshirts and you’ll be set.

I’m drifting here, looking down at the ghost of a forest that once had green leaves of a different kind. Caught by surprise with another tree that long ago reached for the clouds that were only above me and not mirrored on the surface just below me. Now down below there are rainbow trout, smallmouth bass and my reflection looking back up at me.

We’re here for your canoe and camping needs plus so much more. Winter is coming and it’s a great time to get back to your reading lists. Check out our online bookstore if you haven’t already and our exciting list of Ely Artist made and written works.

Thanks Leo
paddle on!