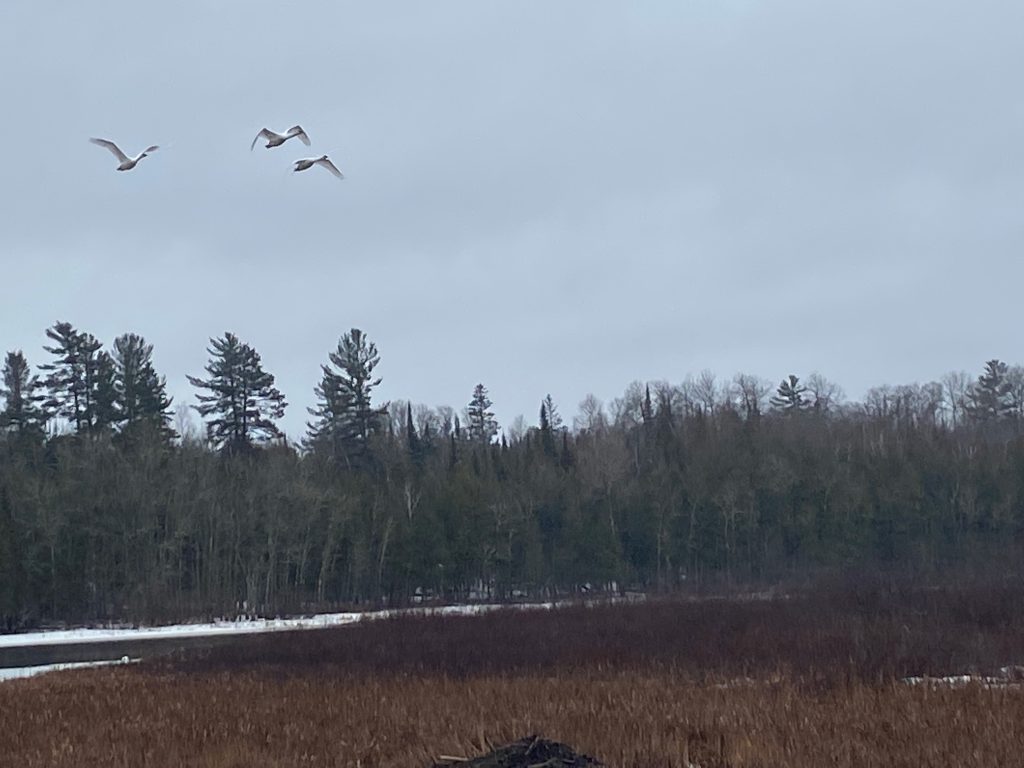 A few days later and the recent snow is melted away. Of course the forecast hasn’t changed, today the rain is falling and deteriorating the determined piles of snow that we have left. I took the short trip out of town to where the river bends into the forest and around the edge of Winton on 169.

The swans had thinned their bevy, but they clung to the same shoreline, now devoid of snow as well. As I held my phone up to capture the same scene from Monday three of them took to the grey skies that held only the pre-meditations of the rain that would soon be falling.

The pair of Canadian Geese were up closer to the road and honked at me several times before they rose up overhead and flew away towards Lake One and the End of the Road about twenty miles away.

After their departure, I crossed to the other side where the flowage was home to a family of Merganzers (both hooded and common) and other Spring waterfowl. The beautiful sound of rolling water accompanied their conversations. I couldn’t make out what they were saying, but it sounded like bits and pieces of a song for Spring and a tribute to the toughness of Old Man Winter.

I drove over to where the river exits Shagawa Lake to see if any of the swans had landed over there but instead I found more Merganzers and Canadian Geese.

Since this morning it has rained over an inch and we are expected to get four more inches of what they call “Wintery Mix.” I guess we will see what happens.

Rain on my metal roof sounds like pretty fair music to the ears right now. It is a welcome change. The ground is thawing and the birds who have returned seem happy enough in their dance on the surface. The water temperature can’t be much above freezing but they don’t seem to mind.

It’s a good day to be half way through the week. The Northwoods is singing.