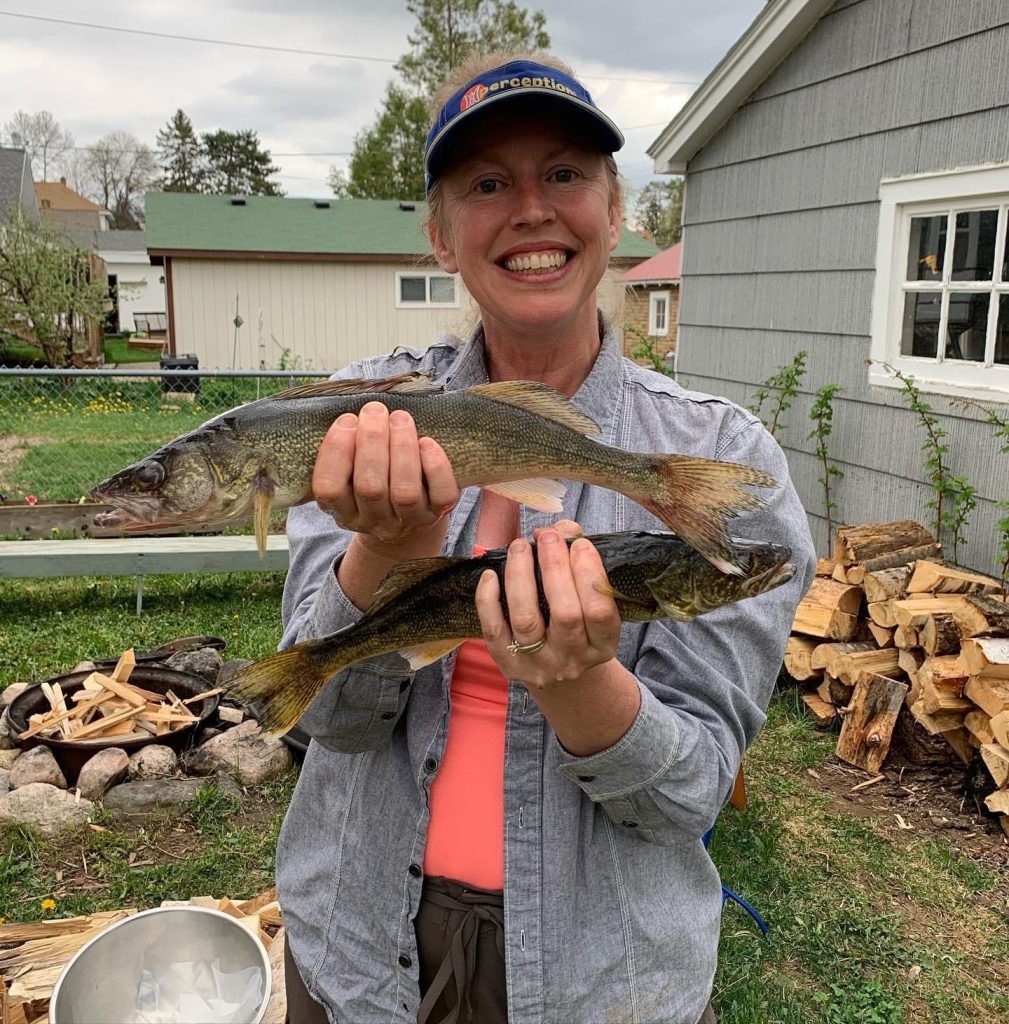 For a couple of weekends in a row we’ve gone out fishing for walleye close to Ely in the late afternoon leading into evening. Usually this time of year, jigging with minnows or leeches is a go-to formula. The trick is finding them during constant air and water temperature fluctuations and sunlight and barometer changes. They always seem to be most mobile in the Spring and less likely to stack up anywhere and stay very long. I chalk it up to both their predatory nature and their particular avoidance of light in favor of shadow.

Generally I prefer the versatility of nightcrawlers and so I got some along with rainbow minnows.

Last weekend we set our anchor off an island where we could see the rocks dropping off sharply and found the bottom around 17 to 20 feet.  We got hits off the minnows nearly immediately two different ways, neither of which was really a traditional jigging method. Usually you lift the jig and let it drop, leave it for a bit and repeat, picking up bites during or after the drop. In this case, we picked up most our bites either during the retrieve or when returning back to our rod after leaving it to sink to bottom while netting a fish for someone else. These “dead pickups” as I call them are particularly fun. We chased them in this style for a while that day and got enough to have a fantastic dinner. We even picked up a Northern that I made Pike Dip out of.

Pike Dip Recipe: Sauté the pike in butter salt pepper and garlic powder. Afterwards let it chill. When cold pick out any “Y” bones left and break up by hand. Chop up celery and yellow onion. I did five stalks and one small onion and four tablespoons of pickle relish for a small/medium fish. Mix all together with a couple of big spoons of mayo. Add black pepper salt garlic powder and a little crushed red pepper if you like and chill. Goes great on a hearty cracker or if you like a rich sandwich like tuna salad on toasted bread. NOTE: Curry powder or Cumin adds another layer of flavor if you back off the garlic.

A week later we returned to the same spot after a couple of nights where we experienced frost advisories overnight and a day where we rose above eighty degrees. That’s northern Minnesota for you, weather in constant flux. We tried near the island from before. On the rocky shoreline a young muskrat was scurrying back and forth in the sun. He was too quick to get a picture of and I simultaneously had a bite. It lead to nothing as did the next hour and so we moved to the nearby shoreline away from the island and began to fish much shallower, casting into the shoreline and retrieving the jigs with rainbow minnows again and nightcrawlers. We got equal hits on both, nearly always on the retrieve from 4 feet to 9 or 10 feet deep. Besides the walleye I picked up a nice sized perch and we released  two feisty Northern Pike. We were joined quickly by a Bald Eagle and some noisy gulls. A pair of loons evidently had this spot on their mental maps as well, because as dinner time for us came and went, they outpaced us in their catch and enjoyed their regular meal time.

The slow and steady breeze seems to wear you out on the water in a calm and somehow refreshing way. Have you noticed that. A good kind of tired after a few hours on the water? The vocalizations of the Eagle, the gulls and the Loons surrounded us. I wished that I’d been able to hear the muskrat or to have been able to watch him for more than a few seconds. His oiled coat had glistened a dark reddish brown in the sunlight as he flitted between blueberry shrubs and undergrowth. I wondered if he frequented the island or if he was just exploring.

Everything slows down out on a lake. The concentration on what you can and cannot feel at the end of your line, what it might be and how long to wait before setting the hook is a new constant after a long winter of walking on water. The sense of touch associated with the rise and fall of slow waves, of current pushing you, takes time to rediscover. The warmth of the sun and the comfort of the sound of the wind blowing through the pines doesn’t require any such adjustment. When you feel those, you are caressed by peace. You embrace them like silence, so different from our everyday noise, so full of comfort is the soundtrack of the woods around.

I didn’t take a temperature of the water. It seems cold but warming daily as is normal for late May. I’d jump in and go swimming. Most people not from here would prefer to wait a couple of weeks. The blackflies are still doing their thing to benefit the blueberries and the mosquitoes weren’t bad until it was time to go home. Normal. As I sat in my backyard an hour or so later cleaning fish, their were scores of huge honey bees droning away as they fed on the newly blossomed crab apple and cherry trees in my yard. I’ve never seen so many before. They also buzzed about the dandelions and found our tiny Lilly of the Valley buds.

It sounded like the promise of Summer to come, outside in the yard in Ely. It was Spring in all of its glorious rebirth. Rising.

Very nice story and well written. Expressed in the same way I feel out on the lake fishing in spring weather.