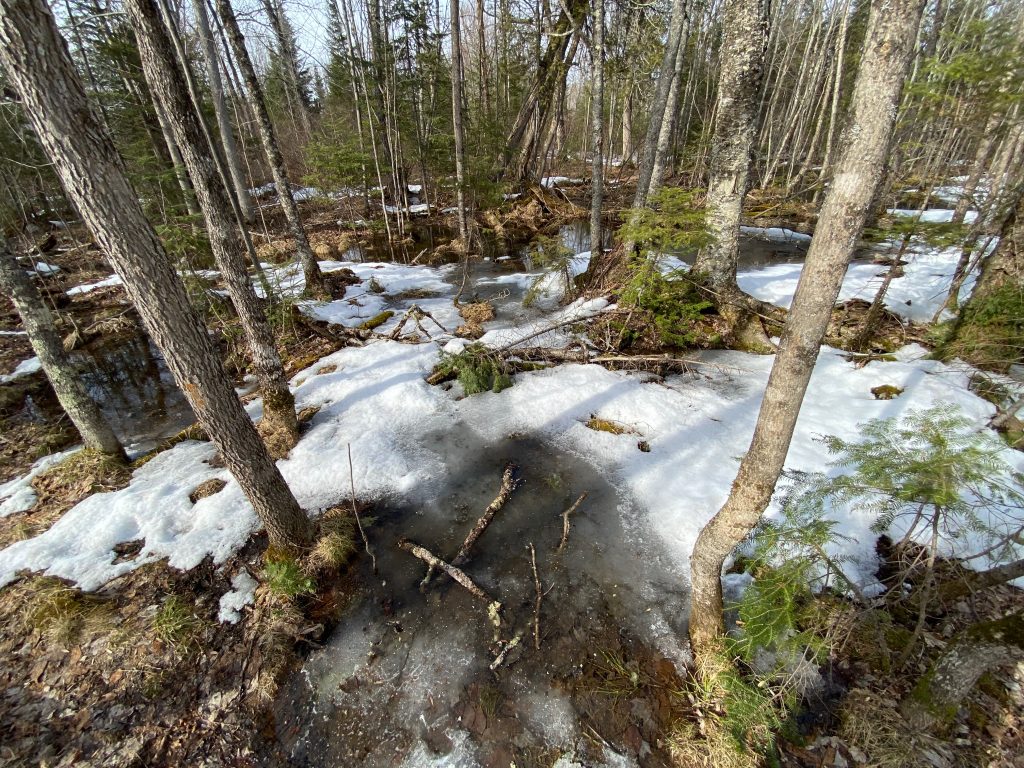 When we left the house on Sunday it was to go on a hike together, to get into the woods for a brief time. Although we’ve been out for walks, runs and bikes, and to go to one of the two grocery stores in Ely or the hardware store, this may have been the first time in weeks that four of us have been in the car together. We just don’t, like many of you, leave home. Usually we’d do that to visit someone, to go to a movie, out to eat, to a school event…

As a result, it felt strange. It felt like we were being watched.

I did notice that there was a lot to see. Not in the people department. A few cars, a few dog walkers, a few runners. People walking on the sidewalk and others (must not be related) walking out in the street parallel to them, six or more feet apart. Kids on bikes.

There have been more ravens around my neighborhood than I recall in during any other Spring. Groups of them in packs of ten or twelve sometimes. Saturday it was grey and cold out and they mobbed my neighbor’s suet cage, knocking it off the hanger and hammering away at it with their big strong beaks. My two cats watched them from the window. At first they made the aggressive and furtive half meows they make when they see robins or song birds and they shifted their weight and retracted their claws in and out like they do when they are kneading a blanket before they curl up for a nap. Their mouths opened and closed with near silence, sometimes their teeth clicked. After more ravens showed up and the suet was torn to pieces the cats sat motionless staring at the growing unkindness. Eventually they shied away from the windows.

The ravens disappeared when our neighbor came out and replaced the suet and rehung the little green cage on its curved wire hanger. Moments after she returned inside, the cats were back at the window looking up at the shadowy black kite like figures descending for round two. This time they were noisier than before.

Anyway, as we drove through the neighborhood on our way to the woods, I noticed a pair of ravens near the Grace Lutheran Church, after something on the ground. I thought they’d gotten into trash or something but as we got closer I could see they were harassing a grey squirrel. In town we’ve got the bigger squirrels, predominantly grey, but occasionally white and black ones appear. They are all larger than the red squirrels of the surrounding forest. The squirrel ran across the road in front of us with two large ravens on her like a second skin. “Odd,” I thought and said aloud. It was.

I noticed something hanging out of her mouth that was long and thin, the same color as her, as she ran up and around a silver maple tree, the ravens in hot pursuit. As I caught another glimpse of her and they rushed but missed, she slipped into the hollow of a fork in the trunk. No mistake, that was a tail. It was then I realized that they weren’t really after her, they were after a baby squirrel that she was protecting, transporting in her mouth. She prevailed and alluded the “wolves”. She went back swiftly for another child and they went in search of more suet.

They weren’t practicing social distancing. Neither were the deer all along the road on the way out of town to the Kawishiwi Falls.

I know there’s probably nothing new I or anyone else here can tell you about the hike to the falls, where the water rushes over the rocks in majestic force and beauty and sprays you in the face as you watch high up on the cliff. However, we didn’t go there to discover something new. We went to touch open water, we went to sink our feet into the mud of Spring, to listen to the fresh, young sounds of the never-ceasing-to-amaze simplicity of the forest floor. To be close to something beautiful and alive and not quarantined.

I thought you like to see what we saw. Some familiar sights. Some promises kept. They can speak for themselves. — Tim

It’s cold enough that the mist freezes to ice and encases the saplings high up on the trail.

The water is cold, fueled in part by the snow that fell last night covering Ely in a white blanket that melted this morning when the sun came out.

We will make it out of this. When we do we will be new.

Pictures are awesome.I really enjoy hearing from you folks there.It helps me keep my sanity.Keep up the good work.