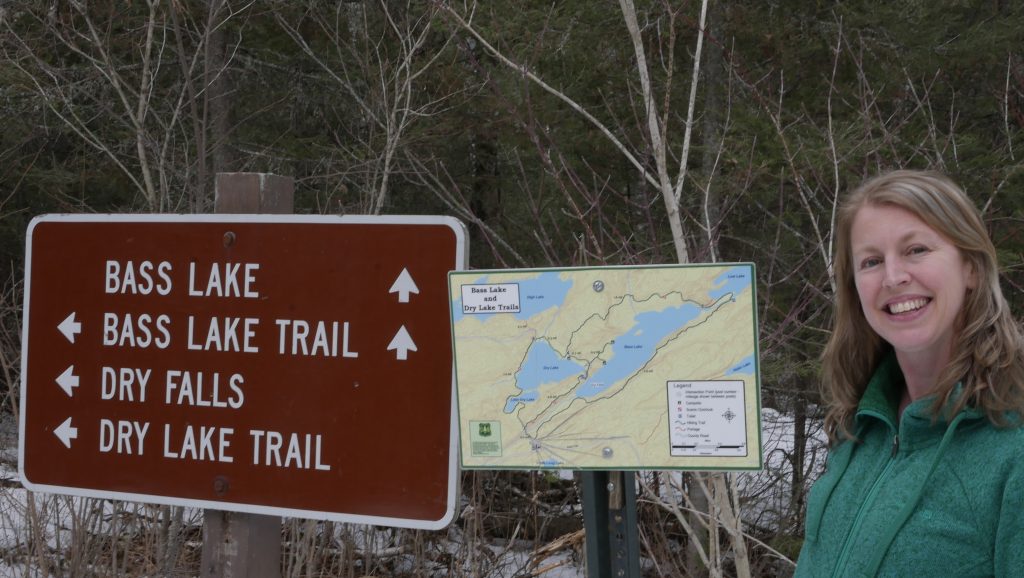 While the streets and sidewalks of downtown Ely are void of snow, there’s still snow cover in the woods so we deciding to go walking on the Bass Lake Trail. With the exception of a few spaces like in the above picture, the trail to Bass Lake (right arm) is crunchy snow for the most part. Spaced in between is an occasional dry spot or icy spot where the sun has come through the canopy above and melted the snow pack.

It’s always great to see water moving and green peaking out from under the snow in April up here. Spring is slow to start and signs of life are heartwarming. I took the following pictures of clues that wildlife has been busy.

I could hear the red squirrels crashing about in the trees and undergrowth.

The Pileated woodpecker had been working on several dying and dead trees that marked the edge of the trail. I didn’t see them but heard them calling through the trees. In town, near my house and the post office, there’s a raven that mimics the Pileated call.

The marsh is snow covered and still solid. Almost every night has been below freezing. It is a transitional time that will change quickly if it begins to rain or the temperatures rise significantly. As we headed down to the lake, I wondered what we would find.

The crunch of snow underneath while walking Bass Lake trail was loud as we continued our walk, accompanied by the continued crashing of the squirrels in the surrounding woods. Above between the cloud cover, the sky was blue and inviting. When we got to the lake the actual brightness of the day was more evident.

Up ahead on the right there were two ice anglers with a pop-up baby blue shelter. To the left (below) we could see and almost hear the flowing waters of the falls

Just to the left of the lake entrance is open water. The whole left hand shoreline may be compromised at this point near the wetlands. The falls also keep current moving in this lake, so it isn’t as predictably ice covered as some. Having an ice chisel to test the ice and safety pics, other safety equipment including fire starting kits and extra clothing is the best course of action anytime you are traveling on ice. Not traveling alone is another excellent way to be smart on the ice.

Underfoot you can see cracks in the ice as different conditions and temperatures throughout the winter have created pressure cracks and ridges. As we were leaving another couple of anglers joined us. They reported drilling holes at least two feet deep. They hadn’t been out as far as the other two on the edge of our vision that were at least as far as the falls but on the opposite shore.

We wore light jackets and were happy to be out in the woods. On the hike back you could tell how much sound carries as there were people hiking the left arm of the trail that climbs up and over the cliffs. We could hear their conversation… they were happy to be outdoors on a beautiful day as well.

April in Ely is a thawing time, when it could rain or snow (a lot) at any minute. The temperatures are usually mild, but still hover in the mid-thirties to fifty. Nowhere near time to plant gardens or mow lawns like it is in the states South of us. It is a time to get outside when you can, to fish for crappie and sunfish while the ice is thick and the sun is warm on your backs. It’s good hammock weather, good book reading light, a great time for walking Bass Lake trail with friends and family.

If you’d like to know more about adventures around Ely, Minnesota and Canoe Camping Trips in the Boundary Waters call us at 1-800-223-6565 and ask for Drew or Adam our Outfitting Managers or click the links above.